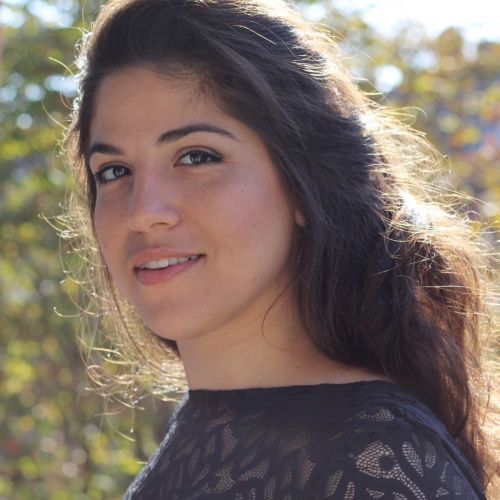 Amy Frega (born 1993) is an Egyptian-American crossover singer. She completed her Bachelor of Arts in Music at the American University in Cairo, specializing in Music Technology and Performance. During her life in Cairo, she worked as a jazz and pop singer, and took part in musicals, such as playing the role of Audrey in “Little Shop of Horrors”, Leila in “Leila the Musical” as well as touring the U.S.A. with the Egyptian production of “Les Misérables”. In 2018 she started her Masters in classical singing at the Robert Schumann Music College in Düsseldorf. Since her time in Germany, she has been active as a jazz, pop and improvisational vocalist, having performed in the production of “Jeff Koons” by the Düsseldorf Theater, and her continuous collaboration with the art collective “Projekt – il" in performances including “Andere Geschichten”. She has also been active in the classical music scene, singing in many Lied duo concerts, namely in the “Chopin Festival”, which was broadcasted by the WDR 3 radio station. In addition to Lied, she made her appearance as a soloist in oratorio concerts, including Handel’s “Messiah” and Mendelssohn’s “Psalm 42” and “Lobgesang”. Last but not least, she has been involved in opera projects as Pamina in “The Magic Flute” and Susanna in “The Marriage of Figaro”.