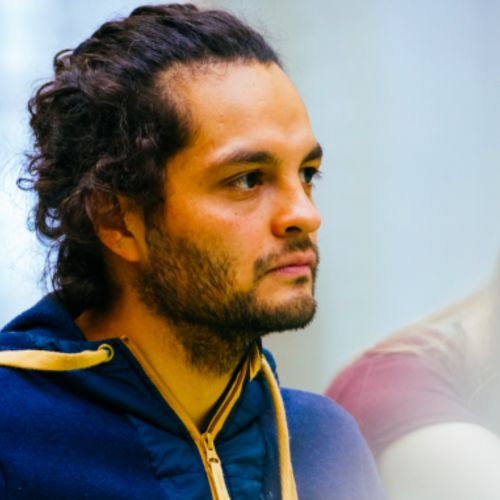 William Sánchez H. has been involved on numerous Contemporary Dance and Performative Projects, he is the Art Director and Choreographer of SZENE 2WEI mixed-abled Company and THEGARDEN // performing arts, and part of the creative team associated with the English creative agency Choreografitti where he works as Choreographer, Dance Maker and Art Director.

William Sánchez H. Advanced studies of Performing Arts with emphasis in Contemporary Dance at the Superior University of Arts of Bogotá – Colombia, Dance-theater at The Folkwang Universität der Künste in Essen - Germany, and the Palucca Hochschule für Tanz Dresden – Germany, where he graduated as M.A in Arts - Choreography.

Next to these creations he has been developing large masses choreographies in frame of community dance all around Europe in company of the Polish Agency Platige and UEFA empowering and bringing dance in different areas for young communities.

Among others he has been involved as interpreter in the worldwide live art Exhibition 12 Rooms at the Folkwang Museum in Essen Germany interpreting “Revolving Doors” by the Cuban American artists Allora and Calzadilla, and 14 Rooms at Art Basel reconstructing the solo performance “wall floor positions” by the US American Artist Bruce Nauman.

"All his works are nuanced with diversity, developing images in movement with different bodies and dance backgrounds on stage, structuring an own movement language and a define style, his pieces are colorful, deep, sarcastic, emotional and poetic, bringing the contemporary dance in a performative way, going beyond the movement, confronting the human condition and opening people’s perspective."

William Sánchez H, is the bearer of the European Tolerance Award Awarded by the Kultur Forum Europe in 2016.